Chesterfield has become a leader in the nationwide trend in community action to address wildlife habitat loss.  The National Wildlife Federation presented Mayor Bob Nation with the award on its 10th Anniversary of becoming certified as a National Wildlife Federation (NWF) Community Wildlife Habitat.  Members of The Citizens Committee for the Environment led a citywide tour of some of Chesterfield’s premiere wildlife habitats, attended by NWF’s president and CEO, Collin O’Mara and Brandon Butler, executive director of the Conservation Federation of Missouri. 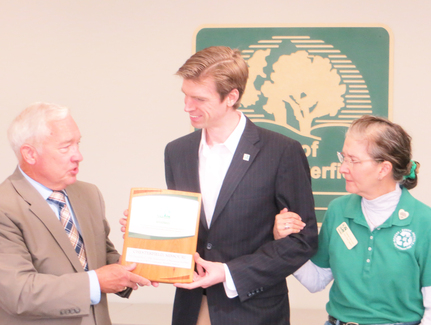 “We are honored to have Mr. O’Mara and Mr. Brandon Butler, executive director of the Conservation Federation of Missouri, make a special visit to Chesterfield to recognize the work of our community to protect wildlife through the NWF Community Wildlife Habitat program.  We are thankful for tireless efforts of our volunteers in the community and specifically the Citizens Committee for the Environment, led by Darcy Capstick, who all made this possible.” said Mayor Bob Nation. “These natural habitats provide a more sustainable future for our community.”

“For ten years, Chesterfield’s work providing wildlife habitat has served as a model for communities across America,” said Collin O’Mara.  “At a time when wildlife is facing unprecedented challenges, I commend the leadership of Mayor Nation, the Citizens Committee for the Environment, and countless dedicated volunteers for partnering with the National Wildlife Federation to demonstrate that wildlife can flourish in a suburban and urban community.”

To become an NWF Community Wildlife Habitat, a city, town, county or neighborhood must make a commitment to become a “wildlife-friendly” community by creating multiple wildlife habitat areas in backyards, schoolyards, corporate properties, community gardens, parkland and other spaces.

NWF Community Wildlife Habitats, like Chesterfield, must also commit to educate citizens about how to garden for wildlife in a sustainable manner and provide the four key elements for wildlife to survive – food, water, shelter and places to raise young. Chesterfield was the 9th community in the country and the first community in Missouri to become a NWF Community Wildlife Habitat in 2005.

“I applaud the citizens and community leaders of Chesterfield for their efforts to protect wildlife and their habitat,” said Brandon Butler. “Today, I challenge every community across the ‘Show Me State,’ from Cape Girardeau to Kansas City, to register in the NWF Community Wildlife Habitat program to make a difference for Missouri's wildlife.”

After the award presentation ceremony, the group planted milkweed in the wildlife garden at City Hall to help support the declining Monarch Butterfly.  The milkweed was donated by the Missouri Botanical Garden.  The tour proceeded to other NWF Certified Wildlife Habitat sites, including: the Sophia M. Sachs Butterfly House, the three-acre native tall grass prairie at Governor Bates’s home in Faust Park, the Grow Native Demonstration Garden at entrance of Governor Bates’s driveway, City Hall grounds and medians, the Butterfly Garden in Central Park, Dierbergs Meditation Park, and the Spirit of St. Louis Airport grounds.

Sheila Voss, vice president of education, Missouri Botanical Garden, commented, that “Chesterfield is part of 2,091 NWF certified habitats, including homes, parks, schools, corporate campuses, and places of worship across the greater St. Louis region.  Building on the actions of Chesterfield, and other communities, between now and 2020, the combined efforts of BiodiverseCity St. Louis and National Wildlife Federation can grow that number double- or triple-fold.  BiodiverseCity St. Louis is a Missouri Botanical Garden-led network of more than 100 organizations (and growing) focused on transforming the ubiquitous landscapes of city life into more productive, functioning living systems that benefit humans, wildlife, and the livability, economic vibrancy, and resilience of the region.

To date, 78 communities have been recognized with Community Wildlife Habitat certification.  Since 1973, NWF has provided millions of people with the basic guidelines for making their landscapes more wildlife-friendly.  There are more than 170,000 certified habitats nationwide.  For more information, please go to nwf.org/community or nwf.org/garden