This website does not support Internet Explorer, We recommend Chrome.
City Home PageGovernmentBoards and CommitteesHistoric and Landmark Preservation CommitteeHistoric Families of ChesterfieldAutenrieth Family

Adolph Philip Autenrieth and wife Louise Marie Sellenriek (b. 15 Dec. 1875, d. 19 Apr 1962) had three children:  Herbert Louis (b. 21 Nov. 1899, d.?); Viola (b. 7 June 1903, d. ?); and Lawrence (b. 17 July 1908, d. ?).  Herbert was born in a farmhouse on Olive Street Road in Chesterfield, Missouri.  Reverend Uhdau, the pastor of St. John’s Evangelical Church, baptized him on 28 December 1899.  Herbert was confirmed in the same church on 28 March 1915 by Reverend Ewald Agricola.  He spoke mostly German until he began attending Lake School.  At home, Herbert helped out around the farm and eventually was able to assist with his father Adolph’s threshing operation.  Adolph owned a thresher and threshed grain for himself and his neighbors.  In 1922, Herbert became an employee at the Chesterfield Farmers Elevator and Supply Company.  To prepare for advancement he took a business correspondence course.  He then served as general manager until he retired in 1964.  After four years of retirement, Herbert became a part-time gatekeeper/security guard at Tyson Research Center at Washington University.  He thoroughly enjoyed meeting the students and faculty who passed through the gates to do research.  After 23 years, he once again retired.

Herbert first saw his future wife, Emma Nora (Nonie) Corless, at the old Gluck’s Garage in Gumbo (now Chesterfield Valley) where he was working on his car and she was visiting the Gluck sisters.  Later at the Easter ball he danced with Nonie.  This gave him the courage to ask for a date which she refused.   She then called and asked him for a date and they were together from then on.

Nonie Corless (b. 3 Oct 1897, d. 21 June 1998), attended Orville School on Eatherton Road and completed eight grades with honors on 21 June 1913.  Between 1915 and 1917, the Corless family lived in Sedalia, then they returned to a home on Wild Horse Creek Road where Nonie lived until her marriage to Herbert Autenrieth on 24 April 1921.  Two years later she was confirmed in the St. John’s Evangelical Church (United Church of Christ) where she taught Sunday School for the next 30 years.

Nonie gave birth to three children:  Gloria, Lionel and Leitha.  Her home, her husband and her children were her life.  Later in life, she enjoyed ten grandchildren and fourteen great grandchildren.  She died at the age of 100 after 77 years of marriage and is buried in the St. John’s United Church of Christ Cemetery in Chesterfield, Missouri. 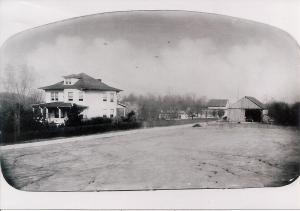