This website does not support Internet Explorer, We recommend Edge or Chrome.
City Home PageGovernmentBoards and CommitteesHistoric and Landmark Preservation CommitteeHistoric Families of ChesterfieldPostal Villages-Part 3

Although Justus Post is credited with founding the town of Chesterfield in 1818, there was no town until the St. Louis, Kansas City and Colorado Railroad established a stop at Drew Station between Bonhomme Creek and Olive Street Road on July 1, 1887.  Four months later, Christian Burkhardt purchased 21 acres between the railroad tracks and Olive Street Road.  He built a general merchandise store next to Drew Station and sold lots for other businesses and homes.  The Chesterfield Post Office occupied a corner of Burkhardt’s store from 1895 until 1914, when it moved across the street to the west side of the Farmer’s State Bank building.  Christian’s son Edward Burkhardt served as the postmaster from 1895-1934.  G. K. Spalding succeeded Edward in 1934 and held the postmaster position until 1967 when the post office was relocated to 15755 Olive Boulevard.  According to Dan Rothwell, “Francis Everett Konneman Sr. was one of the first men to deliver mail on horseback from the Chesterfield Post Office.” In 1895, Konneman delivered three letters on his first trip. Later, Joe Schwenk used a horse and buggy for mail delivery.  However, by the 1920s, the horse and buggy had been replaced with the automobile.

Like Chesterfield, Monarch also developed next to a railroad stop.  The Chicago, Rock Island and Pacific rail line had a stop near the intersection of Centaur and Eatherton Roads in the late 1870s.  This became the center of the village of Monarch.  On the northwest corner of the intersection, William E. Sutton built his general store which also served as a hotel, a saloon, a dwelling, and the post office.  The latter was established in 1895 and operated until 1907 when it was discontinued and the mail was transferred to Chesterfield.  William Sutton was the only postmaster to serve in Monarch.

The last town in the Chesterfield area to acquire a post office was the town of Loehr.  It was founded by William Loehr in 1895 at the intersection of Baxter and Clayton Roads.  Loehr residents referred to the area as String Town.  The town’s businesses included Fred Merten’s blacksmith shop, a general merchandise store operated by the Schrum family and later by the Merten family, Joseph Feiner’s stonemason business, Frank Eirten’s saw and grist mill and a post office.  The post office was established in 1897 and William Loehr served as postmaster until 1902.  The post office was then discontinued and transferred to St. Louis and eventually to Chesterfield.

By 1907, the Chesterfield mail route operated three free rural delivery routes and served approximately 2000 people.  It included the villages of Lake, Bellefontaine, Chesterfield, Gumbo, Bonhomme, Orville, Monarch and Loehr.  Centaur was added in 1959.  In spite of the large physical area and sparse population, the mail was delivered in a timely and orderly manner.  Mail initially reached the area on a postal stagecoach, then by railroad.  Initially, residents had to collect their mail from the general store, but by 1895 it was being delivered on horseback, then horse and buggy and finally by mail cars.  Neither rain, nor sleet, nor dark of night stopped the mail from reaching the Chesterfield area residents. 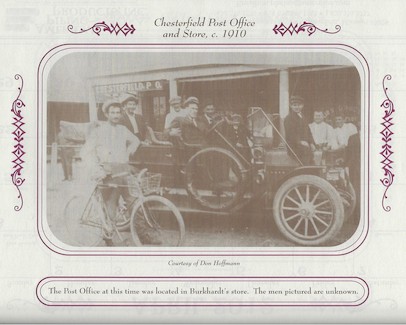 Post Office at this time was located in Burkhardt's Store.