This website does not support Internet Explorer, We recommend Chrome.
City Home PageGovernmentBoards and CommitteesHistoric and Landmark Preservation CommitteeHistoric Families of ChesterfieldWeinrich, Elmer A Family

Elmer Adam Weinrich (10 Jan 1908—03 Mar 1994) married Erma Ida Wolff (09 June 1910—12 Mar 1990) on 1 March 1933.  Both of them were born and raised in Chesterfield, Missouri.  They had one son, Elmer E. Weinrich.  Elmer A. Weinrich founded the E. Weinrich Heating and Cooling Company in 1947 located at 1550 Clarkson Road.  He ran the business until his retirement in 1989.  His son Elmer E. Weinrich then took over the company and continued to operate it until March 2003, when he sold it to Fresh Air Heating and Cooling located in Chesterfield Valley.  The name was then changed to Fresh Air – Weinrich.

While Elmer E. was growing up, the family lived in Chesterfield, Lake and Bellefontaine.  He attended Lake and Bellefontaine grade schools and Eureka High School.  The Weinrichs were members of the St. Johns Evangelical & Reformed Church in Bellefontaine.  They shopped at Rinkel’s Market for everyday needs and went to Maplewood or Wellston for long term needs.  On 19 October 1956, Elmer married Janet Catherine Sellenriek at Zion Evangelical and Reformed Church, which is now known as Parkway United Church of Christ.  Their wedding reception was held at Creve Coeur Farmer’s Club in Creve Coeur, Missouri.

Elmer’s wife, Janet, grew up on a farm along Highway 40 between Mason and Ballas Roads.  She attended Adams School on Ballas Road, Mason Ridge School on Mason Road and Maplewood-Richmond Heights High School.  In 1971, she began working full time in the family business. Later their son, Dan also worked in the business.

Elmer A. and Erma I. Weinrich are buried in St. John’s United Church of Christ Cemetery. 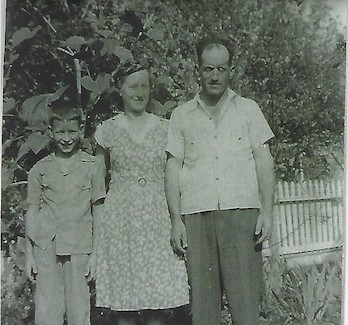 Janet Weinrich was interviewed by Marcella Mertz and Arland Stemme  in July 2007.