This website does not support Internet Explorer, We recommend Edge or Chrome.
City Home PageGovernmentBoards and CommitteesHistoric and Landmark Preservation CommitteeHistoric Families of ChesterfieldStemme, Charles Family
By Ann Chrissos


Many generations of the Stemme family have lived and worked in Chesterfield and contributed to its development.  Charles (Karl) Simon Stemme (b. 1 Nov 1857, d. 3 Mar 1938) was born in Muhlhausen, Germany.  He was the son of Frederich Wilhelm (1826-1889) and Willa Stemme and he had four siblings:  Hermann, Minnie, Wilhelm, and Caroline.  Charles, Hermann and Minnie immigrated to the United States at different times.   In 1869, Charles settled in Lake, Missouri near Olive Boulevard and Hog Hollow Road. He worked for area farmers until he had saved enough money to buy his own farmland.  He eventually acquired 192 acres.  Forty-five acres, located on the north side of Olive Street Road, were purchased from Daniel J. Talbot in the late 1870s.  The property included a log house which sat high on a hill at 13969 Olive Street Road in Lake, Missouri.  Charles also acquired 50 acres on the south side of Olive Street Road, which is now Westbury Manor Subdivision, and 97 acres in the Missouri River bottoms near the St. Louis County Water Company (Missouri American Water Company today), which the family still owns.  The Stemme family raised corn, wheat and soybeans.

Stemme and his bride, Lena Eisenhardt (b. 18 Mar 1866, d. 12 June 1899) began their married life in the log cabin.  They gradually added onto the house as their family grew.  They had six children:  Charles, Jr.; Louis (1884-1892); Hulda; Frederick (1893-1969); Ernst; and Lillian.  Louis contracted scarlet fever at the age of four and died.  He was buried in the Arminia Lodge Cemetery located at Highway 141 and Olive Boulevard. Lillian was only two years old when her mother died at the age of thirty-three.  Following Lena’s death from complications of possibly being gored by a bull, her sister Mary and Mary’s husband Herman Kuhlmann raised her youngest daughter Lillian.  Lena had been the youngest of seven children.

Besides being a farmer and family man, Charles was a prominent member of the Lake community.  He served as the director of Lake School and worked with Felix Queathem the school board president and clerk William Dierberg to provide his children with a quality education.  He was also one of the seventeen founding fathers of St. John’s Evangelical & Reformed Church in Bellefontaine at 15370 Olive Boulevard and he served as the church council secretary.  Additionally, family legend holds that Charles loaned Mr. Zierenberg money to replace his general store after it was destroyed by fire in 1918.  The store was located near the Stemme home on Olive Street Road.

Charles’ son Frederick (1893-1969) inherited the house and part of the farm upon his father’s death in 1938.  He and his wife Louise Vohsen (1898-1990) lived in the house and raised their three sons Walter, Stanley, and Wesley.  At an early age Wesley began working around the farm.   He continued to farm the family’s land after his marriage to Arland Lea Resch in 1957.   Wesley and Arland have three children:  Warren, Jay and Alane.  In the bi-centennial year 1976, the farm was proclaimed a century farm because the same family owned it for over one hundred years.  The property containing the Stemme house was sold in 1995 and the house was demolished so that Eagle Ridge Subdivision could be built.  The original logs were given to the Overland Historical Society for use in the construction of a vintage barn.  Wesley’s son, Warren continues to farm the remaining Stemme acreage.

Charles, Sr., his wife Lena, their son Frederick and daughter-in-law Louise are buried in the St. John’s United Church of Christ Cemetery. Descendants of Charles Simon Stemme continue to be active members of the Chesterfield community. 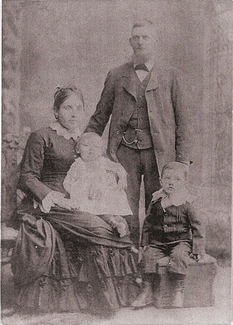 Charles Simon and Lena Eisenhardt Stemme with sons Charles and Louis, circa 1889.  Courtesy of Arland Stemme and Sharon Vohsen.