This website does not support Internet Explorer, We recommend Edge or Chrome.
City Home PageGovernmentBoards and CommitteesHistoric and Landmark Preservation CommitteeHistoric Families of ChesterfieldBaxter Family
By Ann Chrissos

As you travel around Chesterfield, you will see the Baxter name on roads, subdivisions, apartment complexes, and businesses.  Have you ever wondered who Baxter was?  Greene Berry Baxter, his wife Mourning Jones Baxter, and his eight year old son John moved from Kentucky to Missouri in 1818.  He purchased land at the intersection of present day Clayton and Baxter Roads, the latter being named in his honor.  A Chesterfield connection was created when, in 1836, John settled on a farm located near Clarkson and Baxter Roads.  He continued to live on his farm after his marriage to Nancy Sappington in 1841.  The next year their son Hartley Sappington Baxter was born, followed by a daughter, Mourning Baxter 17 months later.  “John Baxter was one of the early settlers who helped build the Old Bonhomme Presbyterian Church” on Conway Road.  After his death on September 10, 1844, he was buried in the Bonhomme churchyard, but his name lives on in Old Baxter Road, Baxter Lakes subdivision, Baxter Crossings Apartments, Baxter Gardens (landscaping company), among other sites located in Chesterfield. 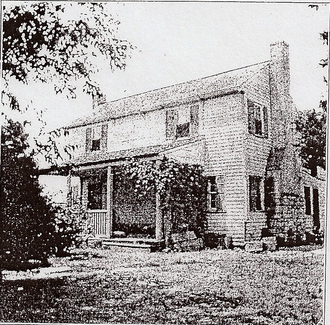