This website does not support Internet Explorer, We recommend Chrome.
City Home PageGovernmentBoards and CommitteesHistoric and Landmark Preservation CommitteeHistoric Families of ChesterfieldJohnson Family

Sylvester Johnson (b. 22 Mar 1870, d. 30 May 1955) was raised in Valley Park, Missouri. He married Ophelia Buckner (b. Apr 1880, d. 30 Oct 1964) in 1897 and they had 17 children. In 1903, Johnson purchased some acreage at 16918 Wild Horse Creek Road in a public auction for $50.00. Since the land was mostly woods, he cut and cleared the trees, built a two room house and moved his family to Chesterfield. Two of his children died in infancy, but the others grew up on the Wild Horse Creek property. Sylvester and Ophelia named their children Dorsey, Nelson, Arizona, Vent, Florine, Henry, Rollo, Laurabell, Wesley, Rachel, Milton, Birdie, Marie, Robert and Lucille.

To support his large family, Johnson worked as a general farmer, carpenter and as a night watchman at Andy Kroeger’s store. The family also shopped at Kroeger’s store as well as at Rinkel’s Market, Glaser Merchandise and Burkhardt’s store and they attended the First Baptist Church of Chesterfield. In 1905, Johnson sold a piece of his property on the east side of his house to Mary Hughes, who planned to build the first school in Chesterfield for African-American students. Besides the Johnson’s, there were six other African American families in the area which included the families of: Buckley White, Nelson Hubbard, Lizzie Taylor, Katie Jackson, George Nassey and Mary Hughes. Consequently, Mary had no difficulty in getting the required 15 students enrolled in order to open her school.

When Sylvester’s son Dorsey was interviewed in 1993, he recalled his father telling stories about Jesse and Frank James hiding in a cave near Wild Horse Creek Road and Griffith Lane. (It is well known that the James Gang used Missouri caves as hide-outs from the law). He also claimed that his father had talked to Jesse James and grew up with Frank James in Valley Park. Although these would have been exciting stories for his children, research does not confirm them. Jesse James was killed in St. Joseph, Missouri on April 3, 1882, twenty-one years before Sylvester moved to Chesterfield. Frank and Jesse James were born and raised in Clay County, Missouri. However Ancestry.com shows that a different Frank James lived in Valley Park at the same time that Sylvester lived there. Although Frank James, the outlaw, did live and work in St. Louis from 1894 to 1904, he was not wanted by the law at that time and he would not have needed to hide out in a cave. Additionally, there was no evidence that Frank James was ever in the Chesterfield or Valley Park areas. By the time Sylvester Johnson moved to Chesterfield, Frank had returned to western Missouri. Apparently, Sylvester Johnson was not only a hard worker and good provider for his family, but he was also a very imaginative story teller. 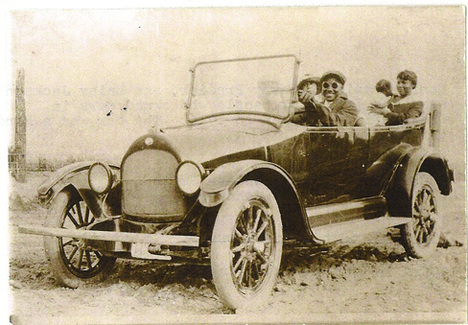 Henry Frazier, Grover Frazier and Daisy Jackson, seated in a Ford, were the first African American people to own cars in Chesterfield. Photo taken in 1916.