This website does not support Internet Explorer, We recommend Edge or Chrome.
City Home PageGovernmentBoards and CommitteesHistoric and Landmark Preservation CommitteeHistoric Families of ChesterfieldHartung, Louis Family

Louis Hartung, father of Adolph Hartung, came originally from Prussia, then to Holland and the United States.  His mother, Harmene  Hartung, came from Germany in 1857.  She spoke only German.  The family came to America when Adolph was a small boy.  He had five sisters, Henrietta, Clara, Augusta, Lily and Caroline.

Adolph’s parents settled in Gumbo, Missouri, which is now Chesterfield.  A group of settlers from Germany and France started a truck gardening operation there.  It grew as more people settled.  They hauled produce by wagons and drays to market in St. Louis.  When trucks became available they were used in transporting this produce.

When the truck farm was sold they moved to Pendelton, Missouri, where they operated a grocery and general store.  Pendleton was a railroad town and for some years Mrs. Hartung boarded railroad men.

In 1924, they moved to Bourbon, to a farm on Highway C.  Later they moved into Bourbon on Highway J.  Adolph started a produce store on Pine Street.  He later turned the business over to two sons, Robert and Roy.

He began a truck line, Hartung Transportation and Hauling Co., hauling freight from Rolla to St. Louis.  He was assisted in this by his sons, August and Jess and son-in-law, James Cameron.

Most of the descendants of Adolph and Ida Mae Hartung lived near Bourbon, some moving to St. Louis.

Robert was the Marshall in Bourbon for several years, later he was employed in St. Louis.  He married Ella Barnhart and they had two children, Robert and Judy.

Roy took over the produce business and extended it into a feed store.  He did his own hauling and ran the business for 42 years; raising turkeys on the side, as many as 10,000 were dressed and sold to stores mostly in Washington and Union, Missouri.  Roy retired in 1973 and passed away in 1978.  Children of Roy and Ethel Landon Hartung were Ida Mae, Laverne, Lee Roy and Michael.

After his father’s death, August (Gus) took over the truck line and operated it with the help of his sons and one brother, Jess.  Gus and Beulah Burnett Hartung were the parents of Burtung, John, Hazel, August and Ava.

Jess purchased the Bourbon Ready-Mix and operated it for several years.  His sons, also worked in the business.  He worked at the Bourbon school until he retired.  He married Oma Richardson.  Their children were Willard, Earnest, Fred, Joan, Martin and Paul.

Louis and Hermene Hartung had a house in Chesterfield which was used to hold German POW’s during World War II.

The kitchen floor in the POW house was at least one foot above the floors in the rest of the house.  When the river flooded, they moved all furniture to the kitchen and left the house.  After the flood receded, they returned home.

Aunt Frances is 1/8 Indian.  Her great-grandmother (Caroline Buck’s mother) was a full-blooded Indian.

Grandpa Hartung’s family did not appreciate Grandma Ida Mae Griffith since she was not a good German.  She was an English-Indian mix out of Kentucky.  They moved out to Bourbon when they married to ease this inter-family relationship.

In a somewhat similar vein, Daddy and Mom (Roy and Ethel Hartung) went into St. Louis to get married without Grandpa Landon’s knowledge.  They rode in on the stock truck.  Aunt Violet and Uncle Walter went along for moral support and to act as witnesses.  Grandpa apparently had nothing against Daddy in particular but just felt that his girl was too young to get married.  He eventually got over it but was pretty mad for a while.

Uncle Jess called his little house the weaning shed.  Both Ernie and Fred married renters.  Jess used to say that he used the house to wean the boys away from Aunt Oma.

Aunt Laverne’s grandmother was a full blooded Indian from Kentucky.

Adolph and Ida Mae Hartung lost a little girl when Aunt Laverne Bennett was about eight to ten years old.  The little girl was named Opal and lived about six months.  Suspect that this is the child listed on the family tree as Alfred Lee.  Aunt Laverne does not remember any other children in that time period that died at a young age.

Uncle Pat Bennett was given the name Pat when he was about two years old by an Irishman.

Grandma Hartung (Ida Mae Hartung) had very long hair.  I (Mike Hartung) saw it down once and it reached to the region of her lower calves or ankles.  She wore it up on her head.  She braided it and made a tight knot in the middle.  She then wound the bulk of her hair around the braid.  It had to be cut in the final months of her life because it was too hard to maintain in her weakened state.  Grandma was offered $100.00 for her hair by an actress who wanted to make a wig out of it.  She refused.  She saved her hair that fell out and made it into watch fobs and other articles for her family.

Catherine Jaycox gave the above information to the Chesterfield Historical & Landmarks Preservation Committee on 16 October 2014. 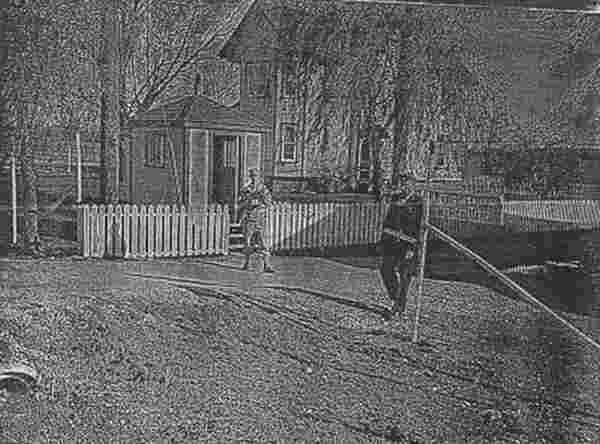 Prisoners of war were housed in barracks on a farm near Chesterfield during World War II.  This photo, taken in 1945, shows guards at the entrance to the barracks area.  The prisoners worked in vegetable gardens in the Missouri River bottoms.  Courtesy of Catherine Jaycox