This website does not support Internet Explorer, We recommend Edge or Chrome.
City Home PageGovernmentBoards and CommitteesHistoric and Landmark Preservation CommitteeHistoric Families of ChesterfieldPostal Villages-Part 1

Rain, nor sleet, nor dark of night could stop the mail from being delivered to the rural Chesterfield area.  At the turn of the twentieth century, the Chesterfield mail route, traveling from east to west, included nine postage villages:  Lake, Bellefontaine, Chesterfield, Gumbo, Bonhomme, Monarch, Centaur, Orrville and Loehr.  Each of these hamlets had a general store from which the post office operated, a blacksmith shop and either a church or a school or both.  The earliest post offices started in 1851 and were located in Bellefontaine and Bonhomme, followed by Orrville in 1858, Lake in 1871, Gumbo in 1882, Centaur in 1891 and Monarch, Chesterfield and Loehr in 1895.  By 1907, all of these post offices had been transferred to Chesterfield except Centaur which lasted until 1959.  Each post office was located in a crossroad store or next to the railroad along Olive Street Road and Eatherton Road.  Loehr at Clayton and Baxter Roads was the exception. Prior to the arrival of the railroad in 1887, the Chesterfield mail stagecoach made stops at the existing postal villages.

The oldest post office within the current City of Chesterfield boundaries was Bellefontaine (originally Bellemonte), located at the intersection of Olive Street Road (Olive Boulevard) and Schoettler Road (Chesterfield Parkway).  In 1850, this village had one general store on the northwest corner of the crossroads where Charlie Gitto’s Restaurant is today.  On April 16, 1851, a post office was established in one corner of the store and John C. Greening became the first postmaster.  This store was built by George Schwenck and later became Hoch’s General Merchandise with Henry Hoch as proprietor.  He also served as postmaster from 1893-1897.  As the 1850s drew to a close, William Reinhardt opened a second general store on the northeast corner where Circle K is today.  He served as postmaster from 1884-1887 and Adolf Hartung, a later owner of the store, served from 1906-1907.  The post office location moved between the two stores depending on who was serving as postmaster.  In 1907 the Bellefontaine post office was transferred to Chesterfield.

The Bonhomme post office also opened on April 16, 1851 and operated until 1895.  Bonhomme (French for “good man”) was located near Howell’s Landing where Old Olive Street Road joins Eatherton Road.  Thomas Bayer, one of largest landowners of the area, as well as a blacksmith and wheelwright, became the first postmaster.  He served from 1851-1855 and again from 1863-1870.  Another major landholder, Charles Boisselier owned a general merchandise store which housed the post office.  He held the postmaster position from 1879-1891.  In 1895 the postal service was transferred to Monarch and then to Chesterfield in 1907.

The next post office to emerge along the Chesterfield mail route was in the community of Orrville, named for brothers John and James Orr.  It was located at the intersection of Eatherton and Orrville Roads.  John’s youngest son Robert became the first postmaster.  He served from 1858-1871.  The post office was then closed for two years.  It reopened in the Hoppenberg-Fick General Store where it operated from 1873 until it was transferred to Monarch in 1895, then to Chesterfield in 1907.  Gustav Hoppenberg served as postmaster from 1873-1883 and Philip Fick served from 1883-1895.  In 1995,the Orrville area was incorporated into the City of Wildwood .

When the Bellefontaine and Bonhomme Post Offices opened in 1851, “the rates for sending a letter were five cents for delivery within a 300 mile radius and ten cents for anything beyond that distance,” (Creve Coeur and Surrounding Areas).  The mail was sorted at the main post office in the City of St Louis, and then sent by a mail stagecoach and later by railroad to the Chesterfield area post offices.  The mail was not delivered to homes until 1895, so the recipients had to collect their mail from the village post office.

Part 2 will discuss the post offices of Lake, Gumbo and Centaur. 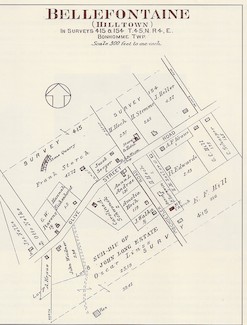