Harry August Kiehl was born to Gustave Kiehl and Ida Austermann Kiehl on April 21, 1911 in Drake, Missouri.  He was baptized at Beemont Methodist Church in Drake where he attended church services and Sunday school.  He also attended the Lone Grove Elementary School in Drake.  Harry met Della V. Bacon in May 1936 and Justice of the Peace Liewickey married them on August 12.  The wedding party included Harry’s sister, Nora Bacon and her brother, Paul Bacon.  During the Great Depression Harry earned 25 cents an hour working on the construction of Highway 40 for Gilloeg Construction.  He drove tractors and operated concrete finishing machines.  Following the highway job, he did a variety of odd jobs; including landscaping, running a gas station, selling antiques, and selling used cars and trucks.  Harry and Della had three children:  Irma (b. 6/9/1937) who married Edward Wendell, Earl E. (b. 3/25/1939) who married Patricia Pearson, and Delores Mae (b. 11/20/1941) who married James Shadow.  As of January 2001 there were seven grandchildren and eight great-grandchildren.  Harry died March 5, 1991 and is buried in the Antioch Baptist Church Cemetery on Wild Horse Creek Road in Wildwood, Missouri.

Della Verna Bacon was born at home in Ballwin, Missouri on November 2, 1919.  She attended the Antioch Baptist Church and Sunday school and the Orville and Bonnhome grade schools.  During her marriage she worked outside the home doing housework and babysitting.

Della’s father, Henry William Bacon (b. 2/3/1878, d. 8/20/1972) grew up in St. Charles County, Missouri, worked for farmers in Gumbo and Chesterfield, Missouri and at Ganahl Dairy on Kehrs Mill and Clayton Road.  From 1918-1920 he worked as a laborer earning a dollar a day.  He had seven siblings:  Andrew, Esther, Annette, Anna Elizabeth, Charles, Jesse, and Robert.

Della’s mother, Elizabeth ( Schaeg) Bacon (b. 4/5/1887, d. 11/9/1971) grew up in Orrville, Missouri and attended St. Paul’s Lutheran Church on Highway 109.  She and Henry Bacon were married on May 29, 1907 by a justice of the peace in Pond, Missouri and had nine children.  Elizabeth and Henry are buried in the Antioch Baptist Church Cemetery. 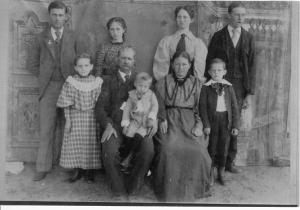