This website does not support Internet Explorer, We recommend Edge or Chrome.
City Home PageGovernmentBoards and CommitteesHistoric and Landmark Preservation CommitteeHistoric Families of ChesterfieldFrommer & Kummer Families

Bates was the brother of Governor Frederick Bates. He served as Attorney General under President Lincoln and he owned an impressive personal library.  Edward Bates was considered to be a brilliant man.  He called his home Hillcrest Farm, which was worked by a large number of slaves.  After he sold his farm to the Kummers, he moved to St. Louis.

Enid Frommer was born in Edward Bates former home.  In 1945, Enid married Arnold Hoffman and they lived on Olive Street Road (Olive Boulevard).  Arnold was a carpenter and Enid raised vegetables and flowers and sold them from a roadside stand near their home.   Enid’s brother Donald served as a sergeant in the U. S. Army during World War II.  Walter, Honora and Donald Frommer are buried in St. John’s United Church of Christ Cemetery. 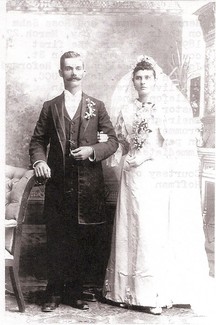 Henry W. Kummer and Rosa Sahm on their wedding day, 27 March 1985. They were the first couple to be married in St. John’s UCC on Olive Street Road. Courtesy of Enid Frommer Hoffman