Pleasant E. Devinney, a Chesterfield landowner and resident, plied the Mississippi and Missouri Rivers as a steamboat owner and captain.  He was born in Alabama on 19 July 1818 to William (b. 1799, d. ?) and Nancy Brooster (b. 1799, d. ?) Devinney and arrived in St. Louis ten years later.  He had four siblings:  Kendrick D., who also became a steamboat captain; Mary Ann; Nancy D; and Elizabeth.

Little is known about Devinney’s early river career, but by 1852 he was well established as a steamboat captain.  As such, he and others invested in the Twin City, one of the largest sternwheelers of her day.  For the next three years, it carried cargo from Pittsburg to St. Louis.  On December 7, 1855, the Twin City was moored in St. Louis near the Parthenia and the Prairie City.  A fire broke out in the hold of the Parthenia and all three ships were lost.  On August 22, 1856, Devinney married Priscilla Long * (b. 5 Oct 1816, d. 18 Apr 1876), the granddaughter of Chesterfield pioneer, Lawrence Long, and widow of Reuben Long, her first cousin.  That same summer the Pacific Railroad Packet Line, known as the Lightning Line, was established.  Its purpose was to carry supplies and mail to government forts along the Missouri River as fast as possible.  It was the river version of the pony express.  By 1858, six elegant steamers composed the line and Captain Devinney became the master of the St. Mary.  It was unsurpassed for speed and accommodations.  At some point along the route Captain La Barge relieved Devinney.  Unfortunately for La Barge, the St. Mary sank at Haney’s Landing at the mouth of Big Tarkio below Nebraska City on September 4, 1858.

Besides working as a steamboat captain, Devinney also farmed and lived in Chesterfield with his wife Priscilla, her daughter Amanda (b. 1845) and their son Pleasant J. Devinney (b.1857, d. 28 Nov 1887).  The 1860 Census also lists Emilio Missicam (b. 1840) as part of Devinney’s household.  On September 22, 1877, Devinney purchased an additional 130 acres of land which included the western portion of the original town of Chesterfield as platted by Justus Post from his stepdaughter Amanda.  She had inherited the land from her father Reuben Long.   It was located along Wild Horse Creek Road between Baxter and Wilson Roads.   Amanda sold the property to Devinney for $1200.

His son, Pleasant J. married Hattie Lee Payne.  Their daughter, Dolly Lee, was Captain Devinney’s only grandchild and she inherited all of his land holdings in Chesterfield.  A 1909 St. Louis County map labeled the property Dolly Devinney.  Obviously, Captain Devinney was interested in preserving history, because he became a charter member of the Old Settlers Association of St. Louis County, when it organized in June 1887.  He attended the meetings which were held at the St. Louis County Fairgrounds.

Captain Pleasant E. Devinney died on April 13, 1895 in Glendale, Missouri at the age of 77 and is buried in Bellefontaine Cemetery.  He certainly adds some color and romance to the history of Chesterfield.

Priscilla Long’s father was James Long, who was born on 29 October 1789 in Albemarle County, Virginia.  Her mother was Leah Fitzwater , who was born on 12 January 1793.  James and Leah were married in 1813. 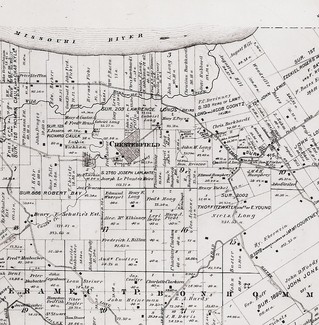