One room schoolhouses in the Chesterfield area included the Chesterfield School and the Bellefontaine School.  Chesterfield School served the areas of eastern Gumbo and the town of Chesterfield.  It was built in 1908 and was located at 16758 Wild Horse Creek Road.  According to William L. Thomas, the first school board was comprised of Robert Coulter, who served as the president; Frank Glaser, who was the clerk; and Albert Wilmas, who was the director.  The fact that these men were willing to take time out of their busy lives to serve on a school board shows how important this institution was to the local community.  When the original wooden school building burned down in 1924, it was replaced with a larger brick structure on the same site the very next year.  In 1951, a new Chesterfield School was built four miles west of the original school at 17700 Wild Horse Creek Road and was incorporated into the Rockwood School District.  Garlin Kellison, a teacher from Bonhomme School, became the first principal of the new Chesterfield School.  Mr. Frank Bube purchased the old brick school in 1960 and converted it into a private residence, where he lived for the next forty-four years.  Today the Bube residence is gone and a new house is being built on the site.

The nearby community of Bellefontaine (Hilltown) also had its own one room schoolhouse known as Bellefontaine School located at 14950 Conway Road.  On January 28, 1860, Samuel Conway, son of pioneer Joseph Conway Senior, and Samuel’s wife Mary Ellen sold 31+ acres of land along Conway Road for one dollar to Maury Eberwein, George Smith and Joseph Brookes, who were the School Trustees of School District Number Four.  A frame schoolhouse was eventually erected on one acre of this tract of land by the inhabitants of the school district.  Although the exact date the school was built is unknown, by 1896 the student population had outgrown the one room and a two room brick schoolhouse replaced it.   William L. Thomas lists the members of the school board in 1911 as George Burkhardt, president; Herman Stemme, clerk; and H. M. Seiler, director.  The school not only provided the three Rs – reading, ‘riting and ‘rithmatic—but it also held rhythm band performances, presented plays with historical themes and conducted formal graduation ceremonies.  In 1910, the school became part of District 27 and in 1954, it was incorporated into the Parkway School District.  Parkway sold the building in 1960 to Norman J. Sutter, who converted it into a private residence.  Today, the August Hill gated community occupies the site. 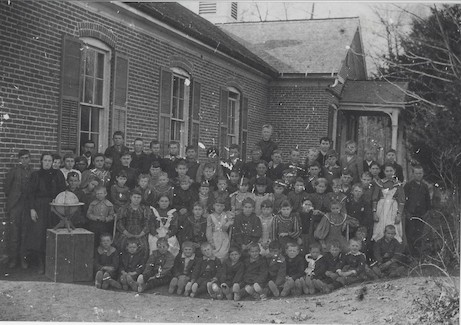