This website does not support Internet Explorer, We recommend Edge or Chrome.
City Home PageGovernmentBoards and CommitteesHistoric and Landmark Preservation CommitteeHistoric Families of ChesterfieldHaas Family

Fred Haas (1891-1961) married Selma Klaustmeir (1896-1971) and they had two sons:  Walter (b. 21 Dec 1916) and Elmer (b. 30 Nov 1920). Walter attended Adams School on Ballas and Clayton Roads and graduated from Weber School before the family moved to Chesterfield in 1928.  Fred Haas purchased twenty-five acres and had a house built in 1911 by the Lynch (Lintz) family.  It was located on Conway and Olive Street Roads where the Fidelity Investments stands today.  The house had three floors, but the third floor was only used for storage.  There was a summer kitchen to the right and rear of the house. Two rooms in the house were rented to Helen and Tom Bastean.  The property had fourteen sinkholes on it. Fred’s and Selma’s younger son Elmer attended Bellefontaine School on Conway Road.  The family shopped at Rinkel’s Market, Mrs. Ficke’s Store and the Chesterfield Grain Elevator.

The Haas’ next door neighbors were the Fred Ravens family. Frank and Ernie Schneider, two brothers, lived on the north side of Conway Road.  Haas also acquired one hundred-forty acres on the other side of Conway Road which he planted with a variety of crops.  Elmer Haas married Louise Rombach in 1941.  They had four children:  Thomas, Jackie, Robert and Lisa.  Elmer’s brother Walter married Dorothy Jacob (b. 15 Dec 1923) in 1942 at the St. John’s Lutheran Church in Ellisville.  The couple never had any children.  In 1953 they built a house on Schoettler Road.  Walter continued to farm his father’s land until 1957 raising vegetables, raspberries, potatoes, sweet potatoes and straw.

In 1998 the Chesterfield Arts, Inc. purchased a 1978 watercolor of the Haas Home from John Pils to commemorate the tenth anniversary of Chesterfield’s incorporation.  The house no longer stands today. 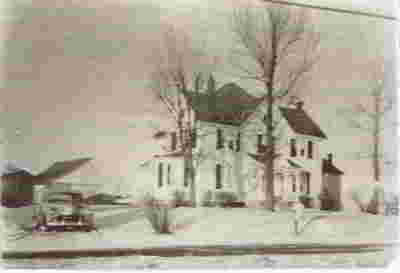