This website does not support Internet Explorer, We recommend Edge or Chrome.
City Home PageGovernmentBoards and CommitteesHistoric and Landmark Preservation CommitteeHistoric Families of ChesterfieldWoods Family

Isaac Woods was one of the early settlers of the Chesterfield area.  He owned land on the west side of what is now Woods Mill Road both north and south of Conway Road.  His neighbors included the Bauers, Conways and Sellenricks.  St. Louis County land records show that he was a noted land surveyor for many years.  He surveyed much of the land in the Chesterfield area.  He also farmed his extensive land holdings.  His original tract of land extended from Woods Mill Road to White Road and wrapped around the one acre site of the Old Bonhomme Church, which is still standing.  On April 26, 1834, he purchased additional land on the southwest corner of Conway and Woods Mill Roads.  Although Woods’ surveying and farming endeavors were important to the area, it was his grist mill that inspired the naming of a road in his honor. 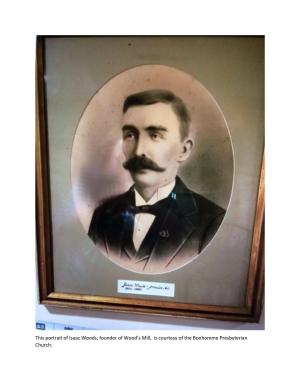 According to author William Thomas, Isaac Woods built a grist mill about one mile north of Conway Road, which operated on water power.  A dam was constructed on Creve Coeur Creek across the road from the mill and a mill-race carried the water to the wheel.  A mill-race was a series of sluices which redirected the water when a shallow, slow moving stream like Creve Coeur Creek was dammed.  Farmers came from miles around hauling their sacks of wheat in wagons or on horseback to have Mr. Woods grind their grain into flour.  When the mill was in operation, it emitted a constant rumble caused by the regular turning of the wheel and of the grinding stones.  The farmers’ sons were fascinated by the “incomprehensible action of grinding grain, separating into flour, shorts and bran” (Thomas).  In the course of each week there were grinding days and days when the mill was at rest.

Isaac Woods died on July 18, 1880.  He left a widow, Amanda, and three sons:  David, James B. and Isaac Jr. as well as considerable acreage in Chesterfield and Lawrence County, Missouri.  David was also a miller, who worked at a Creve Coeur mill until it was destroyed by fire.  He eventually moved to Jonesburgh, Missouri where he served as a deacon at the Mount Pleasant Baptist Church until his death in September, 1932.  He is buried in the Mount Pleasant Baptist Church Cemetery.  David’s brother, James B. Woods, became a surveyor and farmer like his father, but he lived and worked in another Missouri county.  Isaac Jr. continued to  work and live on his father’s Chesterfield farm.

Isaac Woods and his family have left their mark on Chesterfield and neighboring communities.  Woods Mill Road, named for Isaac and his mill, is one of the oldest roads in the area.  Isaac Woods (1804-1880) and his son, Isaac Jr. (1850-1931) are buried in the Old Bonhomme Church Cemetery on Conway Road.