This website does not support Internet Explorer, We recommend Edge or Chrome.
City Home PageGovernmentBoards and CommitteesHistoric and Landmark Preservation CommitteeHistoric Families of ChesterfieldCaulk, Richard Family

Richard Caulk was born in St. Paul’s Parish, Kent County, Maryland on December 30, 1767.  On February 20, 1796, he married Sarah “Sally” Long (b. 17 June 1774, d. Feb. 1851) in Harrison County, Kentucky.  She was the daughter of Lawrence and Priscilla Long.  Shortly after their marriage, they accompanied the Long family to Bonhomme Township, Missouri where they had been awarded Spanish Land Grants. Caulk and Long were some of the earliest settlers in the district.  Lawrence Long brought many slaves with him and settled on 1000 arpens (an arpen = 0.85 acre) in the Chesterfield area.  He quickly erected a flour mill and a saw mill on his property. This fulfilled the Spanish requirement to improve the property.  Richard Caulk was appointed Syndic (judge) by the Spanish governor and held this position until 1804.  He also served as commandant in the absence of James Mackay, the official commandant.  These positions lead to a life long dedication to public service.

Richard Caulk served gratuitously as Syndic and part-time commandant of San Andre (the village in Bonhomme Township founded by James Mackay) where he conducted trials.  In 1797 the Spanish governor Trudeau awarded him with a grant of 4,000 arpens on the Missouri River in Meramec Township.  On September 29, 1804, shortly after the Louisiana Territory became part of the United States, Caulk was one of nineteen signers of a “memorial” addressed to the U. S. Congress.  These men were petitioning Congress to recognize and honor the rights which had existed under Spanish rule. They represented all American settlers in Upper Louisiana who feared they would lose their land grants.  This action set the stage for Caulk’s future involvement in the governance of this nascent U. S. territory.  In 1805, three men from outside of St. Louis were appointed to serve as judges in the St. Louis Court.  These included Richard Caulk, Alexander McNair and Joseph Allen.  By 1809, Caulk became a member of the first territorial House of Representatives.  Other members from the St. Louis area included David Musick, Bernard G. Farrer and William C. Carr.  On January 10, 1809, Caulk was issued 800 arpens of land in Bonhomme Township, Missouri in addition to his previous holdings.  Three years later, the United States went to war with Great Britain.

During the War of 1812 Richard Caulk served in the Missouri Militia.  He was a lieutenant under the command of Colonel McNair and Captain Joseph Conway.  After the war, he retired to his Bonhomme property with his wife Sally and four daughters:  Priscilla L., Sarah L., Rowena and Eliza.  On February 1, 1818, Caulk sold a portion of his land along with two brick buildings to Justus Post.  It was on this land that Post platted a town and named it Chesterfield.  Richard Caulk died in 1822 at the age of 54 in Bonhomme (Chesterfield) and was buried in the Long family cemetery.  Caulk’s Creek, a tributary of Bonhomme Creek, ran through his property and was named for him.  Richard Caulk played an important role in the early history of Chesterfield. 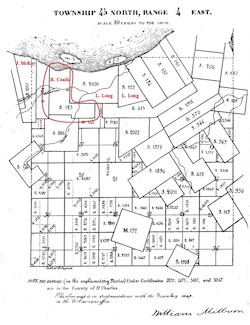 Chesterfield Historical Commission Book Committee.  Chesterfield, Missouri: From Untamed Wilderness to Thriving Municipality, 2011.
Find a Grave.com.  Memorial I.D. 178663005.
Houck, Louis.  A History of Missouri:  From the Earliest Explorations and Settlements until the Admission of the State into the Union, Vols. 2 & 3, 1908.