This website does not support Internet Explorer, We recommend Edge or Chrome.
City Home PageGovernmentBoards and CommitteesHistoric and Landmark Preservation CommitteeHistoric Families of ChesterfieldStrutman, Lauren

Dick Busch and Lauren Strutman met in 1993.  Dick lived in Chesterfield during his high school years in the early 1960s.  Lauren grew up in Ladue, but in the 1970s she spent some time riding her horse in Chesterfield.  The horse was stabled in the undeveloped area of western Chesterfield.

Dick and Lauren have separate architectural firms:  Dick Busch Architects and Lauren Strutman Architects.  They dreamed of someday owning a distinctive building with two front doors.  While Lauren served on the Chesterfield Historical Commission, she became aware of the historic Farmers State Bank of Chesterfield building and its need for restoration.  The building had been saved from demolition by the Historical Commission when the Baxter Road extension into the Chesterfield Valley was constructed.

Dick and Lauren were intrigued by the building’s two front doors.  They decided to purchase it in 1998 and called it “their engagement building.”  Lauren eventually restored it to its original glory.  Dick and Lauren were married in September of 2001 and held their wedding reception at Annie Gunn’s Restaurant in Chesterfield.

The Farmers State Bank of Chesterfield building has been the home of their two architectural firms since 1999.  It was named to the National Register of Historic Places in August of 1999.  It was built in 1914 and is now the oldest commercial structure in the City of Chesterfield.  Lauren’s restoration has won city, county, state and national awards.  Dick and Lauren were named Chesterfield’s Citizens of the year in 2001.  They purchased additional properties on Old Chesterfield Road.  Most of the homes on the south side of the street are now on the National Register of Historic Places.  Additionally, they have purchased and restored historic properties in Wildwood. These include the Ball Essen Farmstead and the Orrville Historic District.

Dick and Lauren reside at “Walnut Hill Farm,” the oldest home in Chesterfield not in Faust Park.  The original log sections of this house date from 1836. 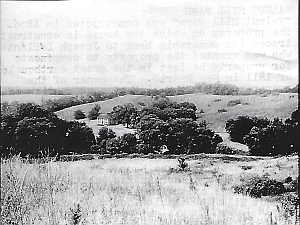 Walnut Hill Farm was constructed in 1836.  The property on which the house is constructed traces its ownership back to Joseph LaPlante, who was granted the property to compensate for property he lost in the great earthquake of 1811 in New Madrid.  The owner of the property during the time of construction of the house was Ruben Long, the youngest son of Lawrence Long, Chesterfield’s earliest settler, for whom Long Road is named.  The house is located on the corner of Wilson Road and Walnut Hill Farm Drive.  Lauren Strutman and Eric Haug restored the house.  The photo shows the home before surrounding subdivisions were built.  Today on the right in the photo is Walnut Hill Subdivision, on the left is Chesterfield Lakes, and in the foreground is Baxter Crossing.  Courtesy of Milford Bland Seabaugh, Sr. family.