The Bauer family has lived and worked in the Chesterfield area for several generations. The parents of Daniel Bauer immigrated to the United States from Alsace-Lorraine and purchased a farm along Woods Mill and Conway Roads. Daniel (b. 1846, d. 1925), attended school in the basement of Old Bonhomme Church and inherited the farm where he raised his family. He married Annie Myers (b. 1850, d. 1938) from Ste. Genevieve and they had a son, Albert (b. 26 Jan 1887, d.1963). Albert married Amelia Mueller (b. 9 Aug 1892, d. 1983). Her parents were Domian (b. c 1866, d.1953) and Elizabeth Ball Mueller (b. abt. 1866) who are buried at Bellerive Cemetery. Albert and Amelia had two daughters, Melva Bauer Westover (b. 10 Aug 1915) and Mildred (Mil) Alberta (b. 12 Jan 1923).
Mil recalls that her father raised wheat, corn, tomatoes, melons and other garden vegetables. Her family owned cows for dairy products, a horse and a mule for farm work and pigs for food. The pigs were butchered in the winter and neighbors came to help. Her mother did all of the cooking to feed the workers. The family also made apple butter and Mil fondly remembers meals of homemade sausage, biscuits and apple butter.
On a Sunday in the early 1930s, Mil walked out her rather long driveway to get the newspaper. She saw a man walking on Conway Road and imagined him to be a robber. She ran the entire way home to tell her parents. Later that day, her dad got a call from the caretaker of the Tiffany Jewelry Company home on Conway. He asked him to call the Sheriff. The caretaker claimed that a group of eight to ten men, some with machine guns, had tied up all the help and had ransacked the house. One of the men with a gun was told to “watch that kid out there,” so he stood at a window with his gun pointed at Mil until she disappeared into her house. Nothing was taken, the culprits were never found and the reason for their search was never discovered. Since this event occurred during the Prohibition Era, her parents speculated that the men may have been part of the Mafia.
Mil attended Bellefontaine School where Garnet Glaser was her teacher for the first four grades. The school sponsored a school picnic each year which Mil attended. Some years it was held on the school grounds and at other times it was in the side yard of Rinkels’ store. The store also had a community center where plays, card games and other activities were held. Since transportation to Eureka High School was not possible, Mil lived with her aunt in Normandy during the week, where she attended Normandy High School. The Bauers attended Bonhomme Presbyterian Church and shopped at Rinkel’s store in Bellefontaine and Zierenberg’s store in Lake. The farm was sold in 1945 and today Brookings Park occupies the land.
In 1948 Mil lived in an apartment and worked in St. Louis during the week. On weekends, she took a bus to Glaser’s store in Gumbo where she used the telephone to call her father to pick her up. While waiting for her ride, she met the store owner’s son, Norvell (b. 5 Jan 1925, d. 17 Feb 2012). They were married on 5 July 1949 at St. Thomas United Church of Christ in Gumbo. They had four children: Barbara Glaser Trettel (b. 3 July 1950); Gayle Glaser Kovarik (b. 6 Mar 1953); Linda Glaser Krumrey (b. 23 July 1957); and Neil (b. 21 Aug 1959). Barbara has 2 children, Gayle has two children and three stepchildren and Linda has three children. Mil also has 11 great grandchildren.
Mil has lived most of her life in Chesterfield, either on her parents’ farm or with her husband in their house on Wild Horse Creek Road. Her grandparents are buried in the Old Bonhomme Cemetery, and she plans to be buried with her husband in Gumbo Cemetery. She currently resides at Friendship Village on Olive Boulevard volunteers on Tuesdays at St. Luke’s Hospital. 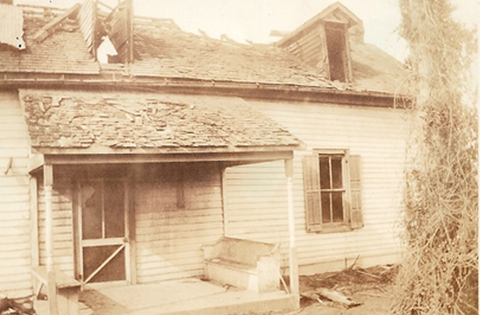 Bauer house following a fire in 1935. Courtesy of Mil Glaser.

SOURCES
Mil Glaser was interviewed by George and Ann Chrissos on 10 February 2016.