This website does not support Internet Explorer, We recommend Edge or Chrome.
City Home PageGovernmentBoards and CommitteesHistoric and Landmark Preservation CommitteeHistoric Families of ChesterfieldWardenburg, Charles Family

Charles and Louisa Mertz Wardenburg bought a farm on Wild Horse Creek Road in the 1890s.  They had five children:  Richard, who married Mae Rickard; Charles, who married Della Von Gruben; Theodore, who married Rose Schott; Louis, who never married; and Augusta, who never married.  All of the children were born and raised on the farm.  The family shopped for groceries at the Kroenung/Glaser Store and used the Sears catalog for clothes and other supplies.  Following the deaths of his parents, Theodore and his wife Rose continued to live on and to work the farm.  On 18 April 1915, their son Irvin was born.  Irvin, along with his brothers and sister, attended Orville School, as did their father.  The family attended St. Paul’s Lutheran Church on Highway C.  On 31 December 1939, Irvin married Virginia Wipke of Creve Coeur, Missouri.  They continued farming until Irvin’s death on 7 June 1971.  Their son Robert married Marilyn Shepardson of Rock Hill, Missouri on 1 June 1969.  They have two children:  Kristen and Mark.  In 1992, the Wardenburg farm was recognized by the St. Louis County Farm Bureau as a century farm for being in the same family name for 100 years.

It is apparent that the Wardenburg family has had a long association with Chesterfield. 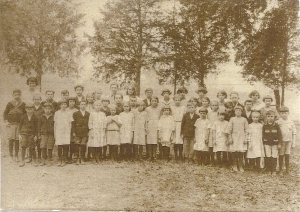 Walter and Marie Wardenburg were part of this 1933 picture of Bonhomme School.  The teacher was Marlin Kellison.  Courtesy of Della Bacon Kiehl.