This website does not support Internet Explorer, We recommend Edge or Chrome.
City Home PageGovernmentBoards and CommitteesHistoric and Landmark Preservation CommitteeHistoric Families of ChesterfieldBeckemeier Family
Edited by Ann Chrissos

August G. Beckemeier (b. 1867) is another family name commemorated in Chesterfield.  Mr. and Mrs. Beckemeier purchased a farm at 14415 Olive Street Road (Olive Boulevard today) from Charles Ober in 1903.  The property contained a small house near the road and a larger main residence built behind it.  The Beckemeiers raised corn, wheat, potatoes, and hay along the Missouri River bottoms and grain, fruit trees and berries on the hill.  Additionally, they raised chickens and peacocks.  After their daughter Minna married Fred Waldmann, the newlyweds lived in the Beckemeier home with Minna’s parents.  August died in 1957, but the Waldmann’s continued to farm and raise peacocks.  Their peacock flock swelled to 150 birds.
In May 1997, Minna presented the 54 acre farm to the Missouri Department of Conservation as per her father’s request.  On 45 acres of woodlands and 9 acres of grasslands, the state created the August G. Beckemeier Conservation Area which offers a hiking trail, viewing bench, picnic table, and a small parking lot.  The Beckemeiers and Waldmanns are buried in the St. John’s United Church of Christ cemetery; however the Beckemeier name remains alive in Chesterfield. 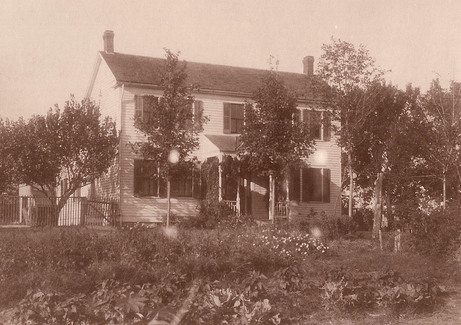 Home was constructed about 1880. It had been in the August Beckemeier family since 1903. Minna donated it to MO. Dept. of Conservation in 1996. Home was demolished in Dec. 2006.