This website does not support Internet Explorer, We recommend Edge or Chrome.
City Home PageGovernmentBoards and CommitteesHistoric and Landmark Preservation CommitteeHistoric Families of ChesterfieldRuby Family

The Ruby family’s move to America began with Ray Ruby’s paternal grandparents, Josh Ruby from Bohemia and his wife Aida Frances Daniels of Scotch-Irish ancestry and his maternal grandparents who emigrated from Germany.  Ray’s father, George J. Ruby married Orlie Lugon in 1904 and had two daughters, Hortense and Irene, and a son, George.  When Orlie died, George J. married Mary A. Becker and fathered eight more children.  In his book, Do-Tell Hear the Corn Grow, Ray lists them as twins Ferd and Joe, Leonard, Jess, Mary, Bob, Ray and Tom.  The family lived in Overland until 1929, and then they moved to the hill farm in Chesterfield, Missouri.  It was located on Griffith Lane off of Wild Horse Creek Road just past Wilson Road.  On page 5 of Do-Tell, Ray reminisces about his mother.

“Mom washed all clothes by hand using water heated in a large iron kettle outside by the smokehouse.  Pop always started a fire and heated the water for Mom, early on each washday.  Overalls were boiled with homemade lye soap, and then scrubbed on a scrubbing board and rinsed.  I still don’t know how Mom could get everything done and still have time to help us with our problems.  She baked 9 loaves of bread every other day, made coffee cake or cinnamon buns on Saturday for our Sunday breakfast and canned everything that would go into jars.  She also sang in the choir at Ascension Church for the only mass which was at 7:00 A.M.  Ascension Church was a mission church and was served by our pastor, Father McCartney, who lived at the principal parish at Centaur Station.  Father had no means of transportation so someone with a vehicle from Chesterfield would go get him and take him back each Sunday.  It was two miles to church, a long walk for little people but Mom always made it look easy and we always arrived well before mass began.  It was only another ½ mile to Andy Kroger’s general store by the railroad tracks in Chesterfield, so we generally walked there for any necessary purchases before starting home.”

During World War II Ray’s five brothers served in the military.  Joe and Leonard were in the army and served in the Southwest Pacific.  Ferd and Tom were also in the army, but Ferd served in the European Theater and Tom stayed stateside.  Bob was a U. S. Marine stationed in the south Pacific and Ray was a merchant marine who served in the Pacific, Atlantic and Indian Ocean. 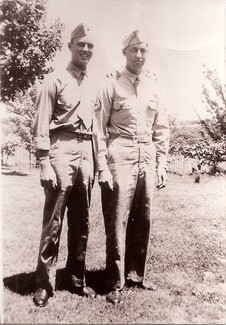 Source
Marcella Mertz obtained permission from Ray L. Ruby to take the above information from his book, Do-Tell Hear the Corn Grow.