Frank W. Wiegand (1910-2003) married Claire Marie Mahr (1916-2011) on 4 July 1941.  They had five children:  Donald F., a sculptor; George W., a musician/counselor; Mary Claire, an artist/painter; Jane, an artist/painter as well as the owner of Smoke House Market and Annie Gunn Restaurant; and Julie, an artist/painter.  The Wiegand family moved to Chesterfield in 1952.  Initially, they rented the original Smoke House property from Mrs. Lela Kroeger and eventually purchased it from her.  The Wiegands operated the Smoke House Market which was open for business every day but Mondays.  Claire tended the store while Frank worked at the Ford Motor Company.  After two years, Frank left Ford and joined his wife in operating the store.  They also rented out the attached tavern, which later became the Pot Roast Inn.

The Slaughter House was a brick structure built by Andy Kroeger in 1927.  It was located on the north side of Bonhomme Creek at One Wiegand Drive.  Kroeger used the building as a slaughter house and operated the Chesterfield Mercantile in the old Burkhardt store on the south side of the creek.   In 1937, Andrew H. and Lela A. Kroeger bought three acres of property at what is now 16806 Chesterfield Airport Road from Edmund P. Andreas and built a new store and residence.  Mr. Kroeger died in the slaughter house in 1943, but his wife Lela and daughter Ruth Ann continued to run the business until they sold the property to Frank and Claire Wiegand in 1965.  In 1986, the Wiegands sold the business to their daughter Jane and her husband Thomas P. Sehnert. The Sehnerts continue to operate the Smoke House and added Annie Gunn Restaurant in 1989.

In 1965, Don Wiegand began renovating the slaughter house into a studio for the creation, exhibit and sales of his sculptures.  Over the years, Don has received international recognition and admiration.  Among his most famous sculptures are those of Charles Lindbergh, Gussie Busch, Ernest Hemingway, Bob Hope, and Pope John Paul II.  Two of his sculptures were presented to Presidents Reagan and Bush in Oval Office ceremonies.   Reagan received a sculpture of Mark Twain from the State of Missouri in 1985 and in 1989 Bush accepted a Wiegand sculpture of Ernest Hemingway from the State of Idaho and the Hemingway family.  In 2002, the Washington D. C. USO presented President George W. Bush with the Don Wiegand sculpture Spirit of Hope which is located in College Station, Texas.  Pope John Paul II was presented with Wigand’s first cast of a twenty-two inch tall stainless steel maquette of Mother Mary.  The maquette was also commissioned by Bob Brooks and Mary Faust and upon their deaths, Brooks’ sculpture was given to Ascension Catholic Church in Chesterfield and Faust’s went to St. Louis Priory in Town & Country, Missouri.  In addition to sculpting, Don Wiegand is also the founder of the Wiegand Foundation, a non-profit organization for charitable and educational purposes. He is currently working with the Heritage Foundation to establish a local history museum at Chesterfield Mall. 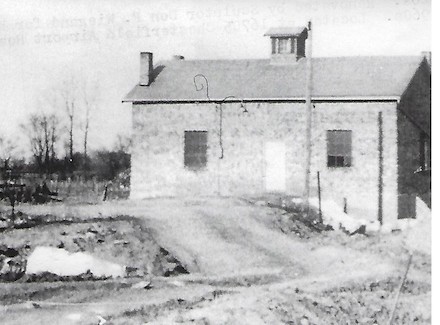 Andrew Kroeger slaughterhouse built in 1927.  It was renovated by sculptor Don F. Wiegand for his studio  in 1965.  Courtesy of Don Wiegand.

Sources
Don Wiegand was interviewed by Arland Semme and Jane Durrell on 23 August 2007 and by Ann Chrissos in April 2018.

Frank and Claire Wiegand were interviewed by Arland Stemme on 22 October 22 1999.