The village of Lake, Missouri was located along Olive Street Road and Hog Hollow Road.  Nannie T. Stevens, one of the residents of Lake, donated a plot of land for a school across the street from the Quathem property.  A 25 x 60 foot one- room schoolhouse was constructed on the site in 1897.  It was a white wooden structure with black shutters, six windows and a bell cupola.  The interior contained rows of double desks, a blackboard, a potbellied stove, a cloak room, bookshelves and a teacher’s desk.  Lavern Reising was the teacher in the early 1920s.  By 1925, the student population had grown to sixty-two, so the original school building was purchased by E. W. Zierenburg and moved diagonally across the street behind his Mercantile Store.  It served as a storage shed until 1967 when it was purchased by Louis Gilber.  Gilber donated the building to the Creve Coeur-Chesterfield Historical Society.  It was then moved a second time to a park on Coeur de Ville Drive in Creve Coeur.  The estimated moving cost was $1600. Today it serves as a museum to showcase life and education at the turn of the twentieth century.

After the first Lake School was moved, a new larger brick school was constructed on the original site in 1925.  It served the Lake community until 1948, when it was consolidated with the Fern Ridge District.  The building was sold and converted into a private residence.
Around 1900, Frank Storch donated an acre of land for a second Lake School to educate African-American children.  It was located west of River Valley Drive.  According to Dan Rothwell, “about thirteen children attended, mostly from the Brooks and James families.  They were descendants of slaves who had lived in Hog Hollow (Lake) during the Civil War.”  Nothing remains of this school.  Chesterfield School also had a corresponding school for African-Americans students.  It was located on Wild Horse Creek Road and was  attended by the descendants of slaves.  These slaves had been brought to the Chesterfield area by the early settlers, like the Longs, Caulks and Bacons.
Besides these community one-room schoolhouses, Chesterfield also had a one-room church school.  The Old Stone Bonhomme Church on Conway Road was built in 1841.  The ground level housed a one room school and a small living area for the teacher.  The teachers were generally men.

Chesterfield’s seven one-room schoolhouses, Bonhomme, Chesterfield, Chesterfield  for black students, Bellefontaine, Lake, Lake for black students and Bonhomme Church school,  have been replaced with the massive Parkway and Rockwood School Districts.  Although this change is evidence of how much the population of the area has grown, it also indicates how the importance of education has stayed the same.  For more information about Chesterfield families go to http://www.chesterfield.mo.us/historical-commission .html 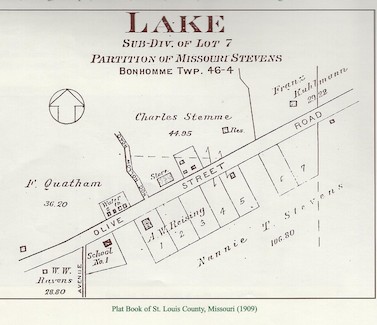