This website does not support Internet Explorer, We recommend Chrome.
City Home PageGovernmentBoards and CommitteesHistoric and Landmark Preservation CommitteeHistoric Families of ChesterfieldChesterfield Blacksmiths

The Chesterfield area was primarily agrarian in the nineteenth century, but supporting businesses such as general store proprietors, saloon keepers, wagon makers and blacksmiths also existed.  Blacksmiths were extremely important to successful farmers because they made, repaired and sold farm equipment, household utensils and horseshoes.  Consequently, hardworking blacksmiths could be found in the eight communities that comprised the Chesterfield area:  Lake, Bellefontaine, Chesterfield, Gumbo, Bonhomme, Eatherton, Centaur and Orville.

Lake (Hog Hollow) was a small settlement centered around present day Olive Boulevard and Hog Hollow Road.  The first blacksmiths to serve this community were Mike Walters, Peter Silver, William and John Dierberg and John Heckelmann.  In 1900, Ernst W. Zierenberg (b. 1878, d. 1953) acquired a general merchandise store when he married Wilhelmina Schaeper (b. 1877, d. 1953).  It had been built in Lake by her father, Herman Schaeper in 1880.  Ernest, Wilhelmina and their two sons, Ernest H. (b. 1909, d. 1949) and Herbert C. (b. 1912, d. 2001) lived over the store.  This building also housed a big hall used for church services, dances, circuit court and other community affairs.  Additional businesses within this structure included a post office, saloon, blacksmith shop, weigh station and rooms for Drummers (salesmen) to spend the night.  A fire destroyed the large frame building in 1918 and Zierenberg replaced it with two separate brick structures, one to house the store and the other for the blacksmith shop.  Other businesses occupy these buildings today.  When the frame one room Lake School House, located to the left of the blacksmith shop, was replaced in 1925 with a two room brick structure, Zierenberg purchased it for a warehouse.  He is buried at St. John’s United Church of Christ Cemetery.

Bellelfontaine (Hilltown) was the community  just west of Lake and was located at the intersection of Olive Boulevard (Olive Street Road) and Chesterfield Parkway (Schoettler Road), north of I-64/40.  Jacob Seeger (b. 1856, d. 1931) was Bellefontaine’s blacksmith.  He had three children with his first wife:  Rose, who married Henry Stemme; Bertha, who married William Stemme; and John (b. 1884, d. 1931), who married Magenta Bruns (b. 1890, d. 1976).  Seeger’s blacksmith shop supported his family and provided a valuable service to residents.  Seeger had one son, William Louis Seeger, Sr. (b. 1898, c. 1983) by his second wife, Emma Mohr.  William, Sr. purchased acreage along White Road where he grew apples, peaches and other produce.  He sold his crops at a stand on Olive Boulevard, which he started in 1911.  It provided for his wife Duetta Grieb and their four children:  Quentin, Rosemary, Arleen and William, Jr. William, Jr. and continued to operate the stand after his father’s death.  Many of the Seegers are buried in the St. John’s United Church of Christ Cemetery.

West of Bellefontaine was the town of Chesterfield.  It was established along Olive Street Road and Wild Horse Creek Road (Old Chesterfield and Baxter Roads today).  Christian Burkhardt created Chesterfield when he purchased uncultivated land and laid out lots which he sold for houses and businesses.  William Koch purchased a 150 foot frontage lot in 1897, on which he built a white frame house with a horse shoe mounted above the front door (16651 Old Chesterfield Road).  In 1903, Koch sold the 50 foot wide section to the west of his house to Henry and Elizabeth Hyde.  Henry (b. 1862, c. 1917) was born in Grover, Missouri to English immigrants.  His wife Elizabeth (b. 1862, d. 1918) was born in Bellefontaine, Missouri to Charles Andreas, a German immigrant.  They had three children:  Walter Lee (b. 1887, d. 1966); Richard (b. 1888); and Georgia Sue (b. 1892).  Henry had been supporting his family as a carpenter and mechanic, but he used the 50 foot-wide property to establish a blacksmith business.  Nine years later, Henry was able to purchase the Koch house next door to his business.  (This building was demolished after the 1993 flood).  In 1914, he leased the blacksmith shop to B. Hinds with the stipulation that one upstairs room would be used by John Winderlie.  Three years after her father’s death, Georgia Sue and husband August Conrads sold the Hyde property to George C. Rupple, Jr.  By then the blacksmith trade was in decline.  The Hydes are buried in the St. John’s United Church of Christ Cemetery.

Continuing west, the next town was Gumbo (Chesterfield Valley), named for its gumbo soil (a fine silty soil which forms a sticky mud when wet).  Gumbo was centered around the intersection of Chesterfield Airport and Long Roads.  At the turn of the twentieth century, that crossroads consisted of Wetzel’s General Store, a hotel, Kroenung’s store, a post office and P. W. Gluck’s blacksmith shop.  Cultivated fields were to the south and west of this business district.

The community of Bonhomme (French for good man) was the most western point for the daily mail-stage on the Olive Street route.  It was located near Howell’s Ferry and consisted of several houses, a store, grist-mill, post office and a blacksmith shop operated by Thomas Bayer.  Bayer (b. 1814, d. 1892) arrived in the Chesterfield area from Bavaria, Germany in 1840.  He quickly established a carpentry business, which he expanded to include blacksmithing and wagon making in order to meet the needs and demands of his neighbors.  Henry Schiller (b. 1865, d. 1888) also operated a blacksmith shop in the area for a short time.

South of Bonhomme was the community of Eatherton (Monarch) which sprang up near the Chicago, Rock Island and Pacific rail line.  William Sutton’s general store at the northwest corner of Eatherton and Centaur Roads became the heart of the settlement because it also housed the post office, saloon and hotel.  Across the street from the general store was a blacksmith shop where farm implements were sold.

The last two settlements along the Chesterfield mail route were Centaur and Orville.  Centaur, like Eatherton, was a railroad settlement.  According to Dan Rothwell, “…by 1909, the small community boasted a building housing the lime company offices and a general store, a blacksmith shop, a lime quarry with kiln, hotel, lumber mill, church, a one room schoolhouse, a post office and a stave factory.”  Orville was centered around the intersections of Eatherton and Orville Roads and is part of the City of Wildwood today.  Its early blacksmith was William Preston Calvert, who moved to Orville in 1892.  He opened his blacksmith shop next to the schoolhouse.

The fact that every settlement in the Chesterfield area had a blacksmith indicates the importance of this occupation in the nineteenth and early twentieth centuries.  Blacksmithing not only provided necessary goods and services to the areas’ residents, but also created jobs and supported the owners and their families.  The blacksmiths of Chesterfield worked hard at this hot and dirty job so their communities and families could prosper. 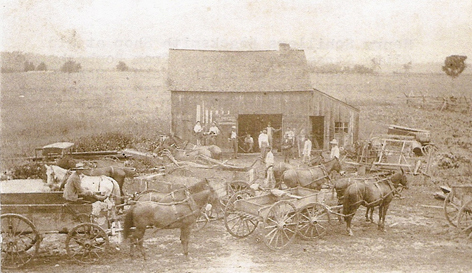 Schiller's blacksmith shop in Bonhomme, circa 1888. Henry is in the building at the anvil. He died from pneumonia at the age of 23. Courtesy of Ruth Schiller.