This website does not support Internet Explorer, We recommend Edge or Chrome.
City Home PageGovernmentBoards and CommitteesHistoric and Landmark Preservation CommitteeHistoric Families of ChesterfieldSmith, Samuel Family

Dr. Samuel Smith Senior was born in County Derry, Ireland.  He attended the University of Edinburg in Scotland where he obtained a medical degree. This was the leading medical school in the English speaking world at the time.  Dr. Smith then moved to Pennsylvania where in 1786 he married Elizabeth Gordon (1765-1829), sister of George Gordon and Mary Gordon Mason.  Smith petitioned the last Spanish governor, Don Charles Dehault Delassus, for a land grant in the Chesterfield area.  On October 20, 1799 he received 450 arpents (375 acres) on the upper reaches of Creve Coeur Creek.  This was several miles south of Gordon’s land.  Dr. Smith practiced medicine in the Chesterfield area until his death in 1807.

In 1810, the Widow Smith had a log house chinked with blocks of lime built near Conway and South Woods Mill Roads.  This house was inhabited by Smith’s descendants for the next hundred years.  Dr. Smith’s property went all the way to Clayton Road, which was originally named Smith Road in his honor. However, the named changed to Clayton Road in 1877 for Ralph Clayton, who donated a large tract of land to the newly created St. Louis County.

The Smith’s oldest daughter Sadie married Robert Ramsey.  They made their home in Marthasville, Missouri.  During the War of 1812, Sadie, Robert and three of their children as well as their unborn child were massacred by Indians.   Sadie, while milking a cow, was shot twice by Native Americans who had allied with the British against the Americans.  Her husband and children were tomahawked to death.

Sadie’s brother, Samuel Smith Junior (1805-1864), whom everyone called Neighbor, became a doctor like their father.  He married Rachel Hibler (1808-1888) and their son, Winfield Scott Smith (1836-1892) served as a major in the Union Army during the Civil War.  He was a member of 5th Company B Bonhomme Township.  After the war, Winfield, who was married to Appolonia Bagby (1854-1922), worked as an Assessor in the new St. Louis County government.  Henry Smith (b. 1793), another son of Samuel and Elizabeth Smith Sr., married Jane Watson in 1817.  They settled on 200 acres in Manchester, Missouri near the “Bacon Log Cabin” on Henry Road, which was named for him.  Henry served as Justice of the Peace in old St. Louis County.

On October 4, 1816, Bonhomme Presbyterian Church was officially organized.  Widow Elizabeth Smith was one of the charter members.  She frequently offered her house for church services, baptisms and meetings until a log church was built in 1819.  Ten years later, a fire destroyed it.

Dr. Samuel and Elizabeth Smith, Sr. are buried in the Conway Cemetery on Conway Road.  Many of their descendants, including Samuel, Jr., Winfield and their wives are buried in the Old Bonhomme Church Cemetery. 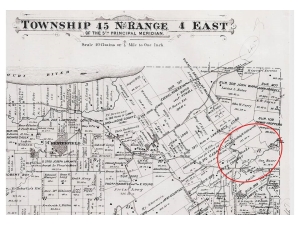